A mark of idiocy.

Was in Baltimore over the immediately previous commie holiday weekend.

Checked out a great deli at Attman’s and and a superb Italian bakery at Vaccaro’s. But while tooling around the outskirts of the city I happened to see this. 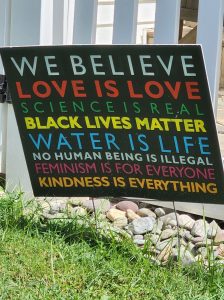 Now, you’ve probably noticed this around. Sadly, there is one in my own neighborhood. It is akin to an uplit 40 foot sign that proclaims “IDIOTS LIVE HERE!” How? Let’s take it apart and find out.

MORE NEWS: Democrats are Concerned About Illegals Visiting Martha’s Vineyard and Not the Terrorists Getting Through the Open Border

Love is Love? Hardly. Is the love of a mother for a child comparable to my love of Blanton’s whiskey? On most days, no. If an adult “loves” a a child in a romantic fashion, is that acceptable? To the people who showcase the aforementioned sign, probably. To any normal human being, no. Etcetera.

Science is real? Absolutely. But the left doesn’t believe in science. They believe in ideology masked as science. So this is just a not so clever way of projecting their lack of belief in science and the scientific method back onto their political opponents.

Black Lives Matter? Not to the people who planted this sign. If they did, these fools would address the plague of murders going on in the black inner cities, a plague brought forth by the defund the police movement and leftist social policies. This sign, found in a suburban white neighborhood (blacks are much too sensible to embarrass themselves this way), is the guilty white liberal means of expressing support for a racist terrorist group that is responsible for murder and mayhem across America. Not to mention, a organization so corrupt that every day there seems to be another one of their leaders accused of skimming millions from the group’s coffers.

Water is Life? Thank you Captain Obvious. They must be referencing the great Water Debate of 2022. No? Oh, then the lack of water in our municipal water systems. Umm, no? It’s like saying “Air is nice” or “Sky pretty”. Not exactly a point of contention.

No human being is illegal? Sure they are. If your desired immigration to the soil of a foreign nation did not begin with an official invitation to reside in that nation, you are committing an illegal act and thus until you leave or get that invitation you are living in an illegal status. Ergo…Okay granted, a bit of a semantic gamble there. But it still doesn’t give trespassers carte blanche to invade the southwest. Seeing the sign we’re supposed to go boo hoo and concede the point. No dice, compadre.

Feminism is for everyone? Nah. Just for ugly women and male sissies. Kindness is everything? It’s a lot and should be encouraged. But, everything? Can you fuel a jet with kindness? Load a gun with it? Sack a quarterback? Deposit it in the Swiss account your wife doesn’t know about? Nope. So, like much else, it has its uses but is hardly everything. For the everything tag to properly fit, we’d have to return to talking about Blanton’s.

Op-Ed: Without Congressional commitment to debt sustainability, we need a fiscal responsibility amendment

Gov. Whitmer Botches the Pandemic Response and Gets Praised for It