Should we give the left what they claim?

I had a conversation with an associate recently. She claimed that a major portion of the Republican Party was fascist. She specifically tagged Trump supporters with that description.

I asked her how that was true, as she and Bernie Sanders had not been put in a concentration camp during the aforementioned administration. Also, how was she able to watch silly trash like MSNBC during the nightmare of Trump’s fascist reign?

As usual with the left, she gave me that dog attempting to learn calculus look and tried to change the subject. I allowed it, since the conversation was bound to become circular.

MORE NEWS: Democrats are Concerned About Illegals Visiting Martha’s Vineyard and Not the Terrorists Getting Through the Open Border

Now look, Donald Trump may be many things, but he’s not a fascist. The vehemence of public opposition to him while he was in office proves that. Those people, as mentioned above, would not be in public circulation if Trump had gone that route. Granted, he has some personality quirks reminiscent of Mussolini. But I’ve never seen him in a fully black ensemble.

But, what if we concede the point that a major part of the Republican Party is fascist? Assuming we’re in power, what if we give the left a real taste of their claims and for just a weekend institute a watered down fascist state? Not a Hitlerian regime, more of a Mussolini or your random Asian or African military dictator type system. Perhaps, after that experience, they’d use another term in discussing Republicans.

First off, we need a dictator. Not Trump, as the guy is actually not cut out for it. We need a real crazoid megalomaniacal villain. Someone who would relish the chance to viciously put the boot into the left for a weekend and then go back to relative obscurity. Perhaps a conservative writer with a military background? Someone who looks good in a weekend getup and yet brandishes a scepter of state. Who could that be? 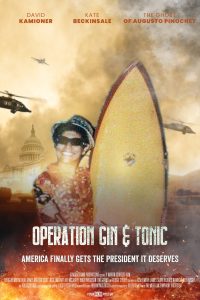 To install my enlightened Saturday and Sunday state as President for the Weekend (cue Loverboy), we’d first have to grab control of communications General James Matoon Scott style. Look it up.

Then we replace all broadcast network anchors with my handpicked cronies, women who will all look like Mexican TV weather girls. There will be short news broadcasts that will feature lingerie shows and monologues on the glories of the new, if time limited, era.

All of the deposed anchors, Dem elected officials across the nation, various liberals chosen by lottery, most of the professoriate, and a generous helping of Hollywood types would be put in the hands of insane USMC drill instructors for two days of ideological cleansing. Those who survive mentally and physically may be considered for reemployment as baristas. We will also repeal most tax and anti-personal freedom laws on the books.

Since it’s only for a weekend, probably can’t go much farther than that. Will, of course, sign full pardons for myself and my henchmen and have the FBI clean up the mess of the king hot damn Jacksonian inauguration level White House shindig we’ll throw Saturday night. Oh, and my friend mentioned above? She’ll go on with her normal weekend. As the public left is so clueless, they wouldn’t notice the reality they themselves claim to be threatened with.

Judge rules Arizona’s ban on abortions can be enforced, setting up legal showdown before election

Shapiro rejects debate terms that would have given him questions in advance, Mastriano campaign says

Op-Ed: Without Congressional commitment to debt sustainability, we need a fiscal responsibility amendment

Gov. Whitmer Botches the Pandemic Response and Gets Praised for It