Welcome to the new era.

“At the core of liberalism is the spoiled child — miserable, as all spoiled children are, unsatisfied, demanding, ill-disciplined, despotic and useless. Liberalism is a philosophy of sniveling brats.” – P.J. O’Rourke

From Dictionary.com: Emo is “A person who is overly sensitive, emotional, and full of angst.”

I lead off with an O’Rourke quote and a definition to establish the ground of this piece. My point is that since about the last 30 years, with seeds going back 30 years prior to that, we have culturally and to a large extent politically become a nation of pearl clutching bratty men and overly emotional screeching women. Welcome to the Emo Nation, where the problem is not toxic masculinity. It’s toxic effeminancy.

No, this is not a blanket indictment. There are many parts of America outside of the Los Angeles, New York, and DC bubble that retain classic American sensibilities of honor, integrity, and patriotism. But these Americans do not run the show. The spoiled professional victims do.

This has far reaching repercussions domestically and internationally. Internally weak men cannot defend themselves, their families, or their nation. They serially tolerate abuse of themselves as men and fathers. They acquiesce in the cultural castration of men as bumblers or oppressors. They vote Democrat, fill our urban centers like overly sensitive teams of gelded show ponies, and are the Quislings in the battle of the sexes.

As a certain type of woman came into power, typified by Hillary Clinton, reason and logic as exemplified by brilliant female leaders like Margaret Thatcher were cast overboard and replaced by shrieking harpies intent on political lunacy and authoritarian socialism. The ‘Squad’ is an example of this spiral into madness.

This phenomenon does not go unnoticed by our enemies. The emasculation of our national spirit is a factor that tempts adversaries to challenge us on the international stage. Did Putin move on Ukraine under Trump? No. Say what you will, and I have, about the former president. But he was no sob sister. Trump projected unpredictable brute strength. Our enemies acted accordingly.

But as the Emo Nation took power in 2021 the ranks of the federal government were filled by men such as Biden appointee Sam Brinton. No, the image below is not a joke. It’s where our national government is in July of 2022. 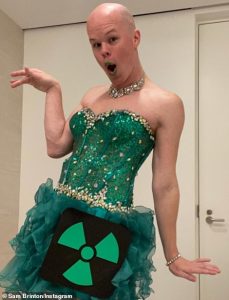 What message does this send to Moscow, Tehran, and Beijing? In a US military also compromised by the Biden administration, will American power be seen as a deterrent to international chicanery or an enabler of it?

This is the fruition of a leftist campaign that began in the 1960s, as every aspect of traditional American culture was set upon by the rabid hounds of post modern agitation.

Values and virtues cultivated for millenia were tossed away to be replaced by the accumulated wisdom of scruffy immediately post adolescent radicals and their academic programmers. Men were now only fascist brutes and women only victims, victims demanding costly and vicious revenge on their alleged task masters. The only males still allowed any credibility by the Bolshevik hive are the aforementioned Quislings.

Where will this go hence? No place safe or sound, as our national consciousness is further weakened and our international standing eroded to the point of farce. So strap in. It’s going to get very bad in the Emo Nation before…it gets even worse.

FDA pulls authorization for AstraZeneca COVID treatment, says it's ineffective against some variants

Bed Bath & Beyond says it is defaulting on credit line, warns of looming bankruptcy