A Parade Of Politicians

Did you have a nice Fourth of July parade in your town? Were there marching bands from local high schools? Local veterans or military groups? Maybe even the National Guard drove by with a couple of vehicles. Boy Scouts? If that was the case, how good. Sounds like a proper Independence Day parade.

I live in Annapolis, Maryland. A fine town, a great place to live. But as Fourth of July parades go, it has very strange priorities. It started out like this. 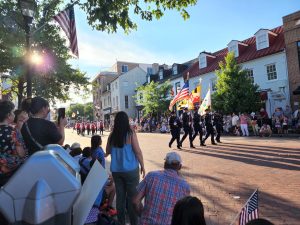 MORE NEWS: GoodRx is BadRx: Company is Fined for Sharing Health Data with Google and Facebook

Nice, huh? A police contingent carrying flags then a revolutionary era fife and drum group. Excellent. Annnnd…that’s when it started.

Right after the fife and drums came politicians. Politician after politician after politician. Both parties. All manner of smarmy, cloying, candy heaving, float propelled, dumb smile, and robotically waving politicians. At first those of us in the audience, I was surveying the scene from a vantage point at an outside table of my cigar lounge, thought this would pass and the real parade would begin. But no, the parade went on for an hour and, aside from several local beauty queens, hardly a parade element passed that was not a prospective elected official.

This was gross, odious, and a hideous way to commemorate the Fourth of July, as if the reason we celebrate the inception of America is to honor jobbing politicians. By the way, not even a nod to the Founders. Those politicians may have deserved a float or two. But, nahhh. All was dedicated to the current crop of aspiring pols. So repulsive. So inappropriate. And then it hit me. So DC.

You see, we live only about 35 miles from DC, in the so-called Golden Circle within a fifty mile radius of Washington. Because the main business in the Circle is government, we are recession proof. For no matter what, the government keeps on growing. We live in the immediate shadow of that taxpayer fueled false prosperity and we reap the benefits. But we also imbibe the attitudes. One of those views takes the public servant definition and turns it around.

In the Golden Circle it is the public who are the servants. Not our public, naturellement. Yours. Taxpayers outside of the Capitol precincts of the DMV (DC, MD, VA) pay the freight so the servants here serve themselves as masters to everyone else.

That’s why the event made perfect twisted sense. That’s why the person who planned it found nothing wrong with a parade of politicians on the Fourth of July. That’s why they ignored the great things about this town like the Naval Academy, St. John’s College, and our maritime heritage. To the myopic planners of this shindig those things paled in comparison to endlessly displaying self-serving politicians and their hangers on, especially in an election year. That’s life in the Circle. Government for the governing class, by politicians, and damn the rest of us who really only wanted a decent parade.