The parties have profiles of their supporters.

Be you a Republican or Democrat, you’re probably on a fundraising list if you’ve ever publicly expressed an interest in politics or shown a partisan preference for one side or another.

These lists are generally used for fundraising and that these days is done many times by text message. Some still use US postage, though text is used most often. The pitches usually ask you to take part in a fake poll or offer you inclusion in what they say is an elite group of fellow supporters of this or that candidate or cause. A donation will defray the cost of the survey or serve as your super secret double probation entrance fee into the group. If you, in a moment of weakness, have donated money to a candidate then you’re more likely to get the mail pitch.

The common operating assumptions of all these missives is that the potential donor is a gullible cretin with a pathological need to be part of a herd. Those text message pitches are both similar and different between the parties and the several wings of the parties.

The hard Left Democrats think you live in fear of a fascist takeover and hate anyone to the right of Pol Pot. The establishment Dems use snob appeal. The Republican populists think you sacrifice small woodland creatures to a winged serpent deity in an attempt to secure a second term for Trump. The establishment GOP asks you to protect America from incipient socialism and other left wing notions. All stoke fear, all want cash to protect you from the object of their fears.

The populists also think their supporters are complete idiots. As a former Trump supporter, I get pitches from them all the time. I have other pals who get Dem stuff and send them to me for my amused perusal.

Here’s one, using the elite group pitch, I recently got from the Trump types. 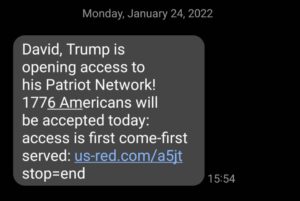 When I ignored their various pitches, which I’ve done hundreds of times since November of 2020, I got this on a fake poll pitch. 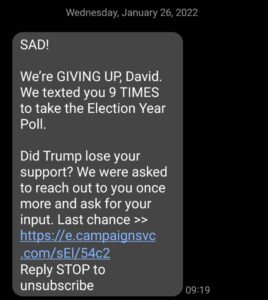 Here’s one a Republican pal, who happens to live in Pelosi’s congressional district, got from Nancy recently. It assumes the Dem is dumb enough to believe midnight is H-hour. The assumption is likely correct. 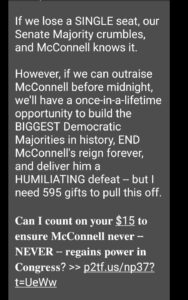 And another from the Trumpists utilizing an appeal to stupidity (ACTION REQUIRED). 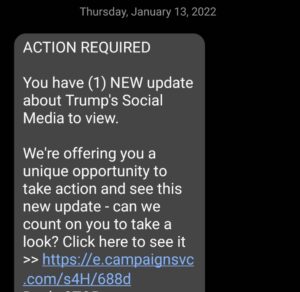 Here’s one that at least shows a little dignity. 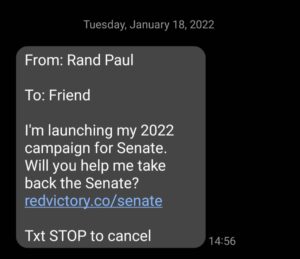 Aside from the Rand Paul appeal, they all use various gimmicks. We see the aforementioned poll and group cons. Also in evidence are McConnell as a bogeyman, the proposal of guilt for not donating, and a reliance on the herd mentality that goes right along with the used car salesman approach of the copy and overall message.

I’m not saying do not give to the candidate or cause of your choice. What I am saying is do not give your money to anyone who insults your intelligence like all the text pitches above except Rand Paul. He’s probably worth the donation of a couple of bucks on general principle anyway.