A Writer You Should Remember

I can remember sitting in high school algebra class, not understanding a whit of it, and reading, using my textbook as a cover, the National Lampoon’s “Unwanted Foreigners” issue. It consisted of over the top hilarious slurs on every ethnicity imaginable. It was absurdist equal opportunity satire. It still ranks as one of the funniest things I’ve ever read. It was written by P.J. O’Rourke.

He died yesterday, Tuesday, from complications from lung cancer. For my whole generation of sarcastic conservative writers he was the inspiration, the top dog, the ne plus ultra. Me included. Like punk and new wave, like Ronald Reagan, like cocaine, he defined the merry libertarian youth of Generation X. Later, he chronicled our middle age with wit and poignancy. I could go on a lot more. But any writer wants their legacy to be their words. So be it. Here’s a smattering of them.

On his college years, “But I couldn’t stay a Maoist forever. I got too fat to wear bell-bottoms. And I realized that communism meant giving my golf clubs to a family in Zaire.”

MORE NEWS: GoodRx is BadRx: Company is Fined for Sharing Health Data with Google and Facebook 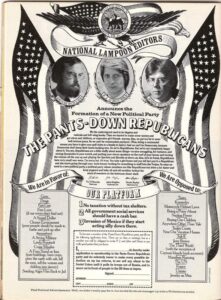 On etiquette, “Good manners can replace intellect by providing a set of memorized responses to almost every situation in life. Memorized responses eliminate the need for thought. Thought is not a very worthwhile pastime anyway. Thinking allows the brain, an inert and mushy organ, to exert unfair domination over more sturdy and active body parts.”

“A hat should be taken off when you greet a lady and left off for the rest of your life. Nothing looks more stupid than a hat.” On inebriants, “No drug, not even alcohol, causes the fundamental ills of society. If we’re looking for the source of our troubles, we shouldn’t test people for drugs, we should test them for stupidity.” He was said to look like “Dan Quayle with a bad hangover.”

On his hometown of Toledo, Ohio, “one of those junkyards of American capitalism…America’s exceptionalism lies not in its successes but its failures. The people of failed Toledo can say to the people of the rest of the world, ‘Our junkyards are more splendid than your palaces.’”

On being editor of the brilliant National Lampoon, “As the boss, I had the people skills of Luca Brasi in ‘The Godfather’ and the business acumen of the fellows who were managing New York’s finances in the 1970s,”

60 Minutes said of him, “He’s become the rock magazine’s reactionary, combining the literary flair of Hunter Thompson with the ideology and haberdashery of George Will.”

MORE NEWS: Sweet Home Alabama? Not Anymore. Hundreds of Murderers and Rapists Set to Be Released

“He can be vicious and nasty, and he strikes the pose of a reactionary, but some of that is just shtick,” the journalist Michael Kinsley told People magazine in 1989. “He’s an anarchist with a heart of gold.”

And yes, he was a reactionary in a sense. He opposed the shallow liberalism of 60 Minutes and Michael Kinsley. Thus he was reacting, as would any sane person, against their essentially authoritarian socialist notions of life and government.

An anarchist? Well, compared to the level of government intrusion in our lives, O’Rourke was one of the many of a certain time in America who wanted government to back off and back down. He just put that into amusing words better than anyone else did, or ever will. And he did it while having great fun. His words will live on and he will be sorely missed. We are a lesser culture without him.