Only Trump Can Reelect Biden

A good friend of mine who lives on the West Coast, and she’s a very serious conservative and an Army brat, got this email from her member of Congress: 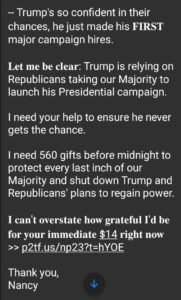 Guess who the Nancy is? Yup, Pelosi. Now think, the Republicans are knocking on the door. Pelosi is scared. History says she will lose the House and the Democrats will also lose the Senate. They think Republicans are fire-breathing fascists. Not to mention sexists, racists, and homophobes. We have House members like Paul Gosar and Marjorie Taylor Greene to go after. The Supreme Court could severely restrict abortion, or to them worse, in the upcoming Mississippi decision. Yet, the Speaker of the House, the most powerful Democrat on the Hill, doesn’t use any of that stuff as a bogeyman. She uses Trump.

Pelosi and her cohorts will continue to use Trump and get mileage out of it. Is it necessarily successful? No. Look at what happened to McAuliffe in Virginia. But to a certain type of lunatic the Texas scare tactics will ring true and bring in millions of dollars in campaign cash to the Democrats. Trump for them is a big fat fuel depot that never shuts down. We need to turn off the pumps.

MORE NEWS: The Doomsday Clock is Winding Down Toward Midnight

Which brings us to the major problem Donald Trump poses to the Republican Party in 2024. Not 2022. Properly managed, as he was in Virginia, he’s a net plus. He brings out his own base, but doesn’t contaminate the rest of the Get Out the Vote effort. In 2024 he could do that even better for DeSantis or Haley and do a lot to ensure a Republican White House. His people, his base, are vital for a win.

But left to his own devices and presidential campaign he becomes an even bigger fuel depot and target for Democrat attacks. We will talk about the future, but Pelosi and the Dems will only want to talk about Trump. Swing voters will be listening. Plus, gawd knows what kind of brouhahas Trump will get into between now and election day 2024. Yup, can’t live with him, can’t live without him. But we’ve got to try.

Offer anything that takes him out of play for 2024. Ask him to focus on his African business dealings. If he doesn’t have any, perhaps he can buy Rwanda or Senegal. Anything, just get him out of here. Get him off of Democrat target radar so the Biden people can’t use him to scare swing voters into voting Dem. Only him, not Joe Biden himself, can reelect Joe Biden.

If we win then offer him the perfect job given his talents, knowledge, and inclinations. Make him chief of the US Trade Negotiating Team, maybe Secretary of Commerce. Trump was never so good as he was when he was making foreigners like the Chinese squirm on trade or making NATO scofflaws cringe when he dunned them to pony up their fair share. He’d be great at it again. Let President DeSantis give him the chance.

The Doomsday Clock is Winding Down Toward Midnight

What I Don’t Understand About Traffic Stops Gone Bad