They always lead to failure.

I was walking downtown several days ago and I saw a sign outside of a church. The specific church and town don’t matter. The church was Episcopalian. 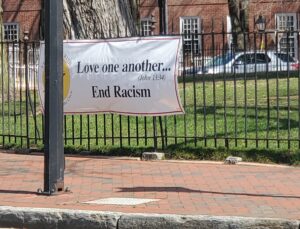 As you can see, outside the church was a banner hanging on a fence. The text was “End Racism.” It sounds like a noble ideal. But in it are seeds of bitterness, resentment, and failure.

As Jesus said of the poor, racists will always be with us. Very sad and very true. Bigotry is tragically part of the human condition. Can and should it be ameliorated as much as possible? Of course. But there are always going to be irrational hateful individuals who make negative judgments on race or ethnicity. The Klan was active a century ago. Black Lives Matter is active today. Remnants of the Klan survive. Remnants of Black Lives Matter may survive. They are both vicious racist terrorist groups and both are with us.

And that’s merely in America. We are actually relatively race, ethnicity, and tribal hatred free compared to Africa and Asia. There is still slavery and genocidal tribal warfare in Africa. In Asia the collective mentality leads to all manner of bigotry. Ask the Japanese about the South Koreans or the Chinese about anybody but the Chinese. The Russians, especially when it comes to blacks? Not exactly racially enlightened. Wonder what a Chilean thinks about a Dominican? Don’t ask. And well, the Germans. We could go on. But you get it. From times long ago and into the future we are very likely to be dealing with vile bigotry and racism. It is unfortunately part of the worldview.

So when well-meaning churches demand we end racism they are asking for us to achieve an unattainable goal. And what sets in when people realize their struggle and journey have been for naught, that at best they are Sisyphus? Bitterness, resentment, and failure for having been hoodwinked into the false trek.

Such has been the work of well-meaning, and not so well-meaning, liberals over the last 60 years during and since LBJ’s Great Society. We’ll end poverty? What actually happened is that we destroyed many minority families and sent them into the abyss of multigenerational dependency and cultural decline. We’ll rebuild the inner cities? We knocked down slums to replace them with worse slums. We’ll improve the lot of women? Welcome to third wave feminism. We’ll strive for total equality? A silly concept only really attempted at the point of a bayonet. And even then, as witnessed in the killing fields of Cambodia, it doesn’t ever work.

This doesn’t mean we should stop trying to make things better by rational means. We should just stop trying to offer impossible utopias that have no chance of success. We should focus, as adults, on the doable. Then perhaps we could eventually claim realistic success in the pursuit of noble endeavors.

Put That Fork Down – It’s an Assault Weapon