Tables Have Turned and Now “Armed St. Louis Couple” Have the Frazzled Soros-Backed Prosecutor Against The Ropes

The tide has turned, and the communist hunter is now the prey

You recall the armed St. Louis couple who defended themselves, their house, and their dog from a violent BLM group who threatened to kill them all and burn down their house, right?

The Soros-backed prosecutor Kim Gardner went after the couple, charging them with felonies, claiming they “brandished weapons” at a “peaceful group.”

A “peaceful group” that broke down a fence to get onto private property…makes a lot of sense, right?

Well, fear not, because in the end the righteous always win, and we’re seeing the tables turn big time, so much so, that the armed St. Louis couple now have Kim Gardner so frazzled and against the ropes, she’s now in the hot seat having to defend herself.

She’s so triggered and upset that she’s now claiming the McCloskey’s have turned the situation into “political theatre,” which is probably one of the most ironic comments ever, considering what Gardner has done to these law-abiding Americans in the name of “communist politics.”

The McCloskey’s have Gardner right where they want her after she foolishly used their situation as a “fundraising” opportunity for herself. I mean, you can’t get more “politically theatrical” than that, can you?

The McCloskey’s are now pushing to have Gardner removed from the case. 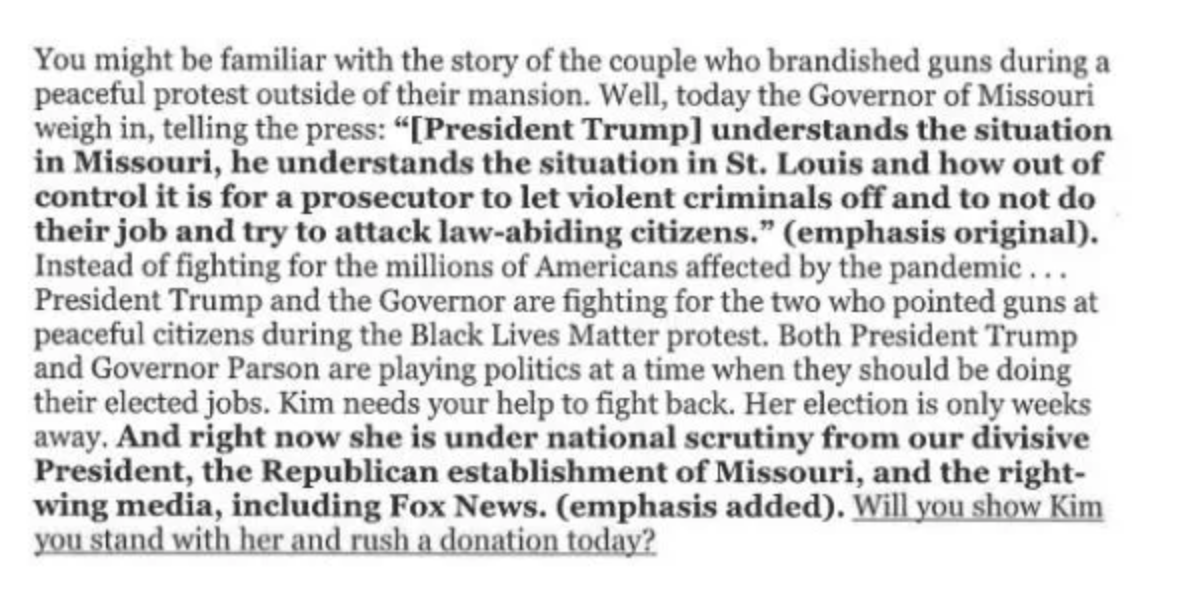 If you look at the block of text above, there are at least two clear references to the McCloskeys, not one. The first is as Gardner’s motion describes it, i.e. a reference to “the couple who brandished guns.” But there’s a second reference which reads “President Trump and the Governor are fighting for the two who pointed guns at peaceful citizens…” So that’s two references to the McCloskeys, meaning this was neither a single reference nor a passing one.

As for the email not linking to any decision or outcome, doesn’t the framing of the entire thing suggest that Gardner’s opponents, i.e. those who are defending the McCloskeys innocence, are wrong to do so? Doesn’t her criticism of Trump calling them ‘law-abiding citizens’ suggest that they are not? You can claim that “Kim needs your help to fight back” is merely a reference to her prosecutorial discretion, but the way this is framed it certainly reads as if fighting back means fighting against the idea that “the couple who brandished guns during a peaceful protest” are innocent. In other words, it reads like a promise to go after them tied to a request for money. But we’ll have to wait and see what a judge makes of all this.

It doesn’t look good for Gardner. Not only do the McCloskey’s have the Governor and state AG on their side, but it now looks like Soros-puppet Gardner will be called out publically for her politicization of this situation and unfairly prosecuting an innocent American couple for her own political and financial gain.

MORE NEWS: [VIDEO] BLM Leader Says Looters Can Take “Whatever They Want” Because Businesses Have “Insurance”

Based on the fact that the Mccloskey’s are also attorneys, I’d say they’re also setting themselves up here for a hefty lawsuit against Gardner and the city of St. Louis.

I think it’s going to be back to the drawing board for Team Soros in St. Louis.

This piece was written by Missy Crane on August 11, 2020. It originally appeared in WayneDupree.com and is used by permission.