The culture is much exercised over January 6th 2021. Yet before that for months, when Antifa and Black Lives Matter terrorized America with murder and destruction, they were hailed by the media and the Left as heroes.

One single riot versus a season of Left wing terrorism. The riot was accused of trying to change the result of a presidential election. The terrorism, by blackmailing the nation into physical intimidation, possibly did change the outcome of an election. Yet one is rightly vilified for one day’s damage. The other is celebrated after months of violence and mayhem. What were the specific differences? Check out the chart below. 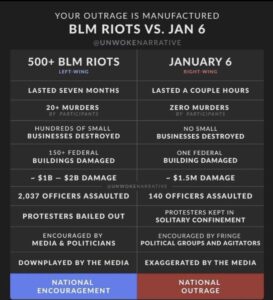 Let’s take all nine one by one.

1-2) 500 plus riots vs one riot- Seven months of terrorizing American streets and towns compared with one day of trashing Capitol Hill. Which did more damage? Murder vs graffiti, which is worse?

3) 20 murders vs no murders by participants- Police officers and children were shot down by Black Lives Matter thugs. One rioter was killed by a fed with an itchy trigger finger. Where were more lives lost?

4) Hundred of small businesses destroyed vs none- How many families lost their businesses and life savings due to Antifa rioting? How many neighborhoods were threatened? How many people were shot? See above. The left wing toll was tremendous. The January 6th toll was minor and temporary.

5) $1.5 billion vs $1.5 million in damage- A gargantuan difference separates the cost of Antifa and Black Lives Matter terrorism and the vandalism of the populist morons who broke into the Capitol. The damage on the Hill was cleaned up soon and used to justify turning the Hill into an armed camp designed to keep out constituents. The cost to families, small businesses, and individuals is likely still being felt by the victims of left wing violence.

6) 2036 vs 140 police officers assaulted- Almost a twenty to one ratio in violence against law enforcement. Antifa and Black Lives Matter targeted law enforcement for murder. The cretins who rioted on the Hill were pro-cop and one was actually killed by a Capitol Hill policeman. Which of the two was thus a greater assault on public order?

7) Antifa and Black Lives Matter thugs bailed out vs the book thrown- Because Antifa is a coordinated effort funded by George Soros, it had the bail money to use and had previously put in office the leftist state lawyers needed to get fast bail and insure weak prosecution. January 6th rioters are treated like Nuremberg defendants and harshly prosecuted.

8) Encouraged by media and politicians vs encouraged by fringe elements- All of them are scum. From Antifa to Black Lives Matter to the January 6th rioters to ALL who encouraged any of them by word or deed or sought to rationalize their actions, they all are the worst America has to offer. So, it’s not a matter of who is more loathsome. They all are equally pernicious. Same coin, different sides. It is severity of result that should temper our views on the matter. The evidence above shapes that subject. As Dickens wrote in Barnaby Rudge about the Gordon Riots of 1780, the mobs were “sprinkled doubtless here and there with honest zealots, but composed for the most part of the very scum and refuse of London.” The same can be said of the Jackson inaugural afterparty of 1829.

9) The media- Black Lives Matter and Antifa killers are supposed angels, January 6th rioters are obviously fascists according to the press. Neither is true. The leftists are the dangerous fascists and still are. The January 6th rioters were pig coiters, ignorant vile populists, and wannabe Brown Shirts. That color of apparel also fits Antifa. A pox on all their houses.