Over the last couple of days a friend was visiting from Texas. As is the norm when people come to Annapolis, she wanted a tour of the Naval Academy. I obliged. After lunch and some drinks we got there about 4pm. We were lucky, given an upcoming football game, that at Bancroft Hall, where we ended up, midshipmen were practicing honor guard duty. That’s when I took the shot below. 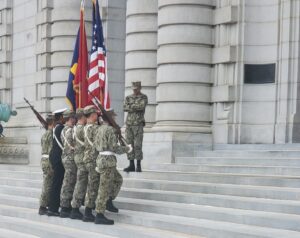 Even better, the pipe and drum band was also out and their bagpipe rendition of the Top Gun theme was catchy and oddly inspiring. So standing in the big room at Bancroft, reading the names of the great and fallen of the US Navy, remembering my dad and son are Navy veterans, it came to me once again how much we owe these sailors and how everything around us is possible because of the blood and bravery of the soldiers, sailors, Marines, and airmen who served and gave of themselves to secure our freedom.

Now far be it from me to agree with some of my fellow veterans that any able-bodied American male who did not serve in uniform holds their manhood cheap. Oh, perish the very thought. But, as WFB said, we owe something to the past and future.

As such, Buckley wrote a small book in 1992 entitled “Gratitude”. In it he posited that Americans, just after their 18th birthday, should spend two years in national service. Be it in the military, the police, firefighter service, nursing, teaching support, the forestry service, or a range of other options, the time would serve as a payment for the debt we owe our country, not to mention as a maturing process for many young people.

There is a libertarian argument against this. Why should the state mandate service from a free citizenry? And as for the military, myself as a veteran included, we prefer a volunteer force. If it’s not necessary, you don’t want the guy in the next foxhole over to be there because he has to be. The issue is, is it necessary?

I used to think not. But as I’ve grown older I’ve changed my mind. Not just because it would be such an excellent experience for so many young Americans, but because, in the Burkean sense, of the necessary national continuum of past, present, and future.

When I taught college I tried to impress this concept upon my students. I was met with dumb bovine stares. Even intelligent decent people I know think the military is for losers who can’t make it in the real world. Well, the kids I saw at the Naval Academy did not strike me as losers, nor did the rows of graves I once saw in Normandy seem filled with our worst and dullest. We owe them and our posterity a debt. It’s high time it was paid by all Americans.