Former Navy SEAL and Trump Administration official goes on the offensive against all forms of tyranny to the Republic, including mask mandates

In response to the liberal freak out regarding the “My Body, My Choice” bill, as usual, the mob has missed the entire point. (LETTER: Mr. Higbie, On Mask Wearing, It’s Not About You, Sept 14, 2020)

Monica Prihoda writes, “What Mr. Higbie fails to realize is it’s not all about him. It’s about community and caring for each other.” Her assumption here is that I’m saying “don’t wear a mask.” That couldn’t be farther from the truth. My contention is that the government does not have the moral authority, or right, to mandate mask wearing for individual American citizens.

The second part of my bill regards the right for business to be able to stay open. As we saw with the recent federal court ruling in PA, the government grossly over stepped their authority in shutting down commerce and limiting gatherings. The Federal judge wrote “PA Gov. Tom Wolf’s coronavirus orders had the ‘good intention’” but “even in an emergency, the authority of government is not unfettered.” After all…we have “the right to peaceable assemble.”

But before I even address that point, I do want to shout out Monica’s all too casual reference to “science!” (subtext: you republican idiot!) without even a cursory attempt to highlight what science she’s talking about. This really seems to be a trend among democrats today. In any case, as show of good faith that I am not the hot headed, knuckle dragger liberals so keenly believe me to be, here are two studies (NJEMand Nature Medicine) that suggest masks do in fact block the transmission of respiratory droplets. Ok, but now what? I’m not trying to argue about the efficacy of masks, but rather the effectiveness of the mask mandates. I am not a doctor, and neither is Monica. In fact, she appears not to have worked in decades and therefore doesn’t have the same economic outlook as those as concerned as I am.

If she is scared, SHE should take precautions accordingly. But I have my own opinions about whether the general populations’ use of masks may do more harm than good. Ask any of my neighbors, caring for one another as a community ranks pretty high on my list.

What I am arguing against is the mask MANDATE from local, state and federal officials. Even Joe Biden said that he believes a mandate on masks is unconstitutional.

As a philosophical issue it’s wonderful that Monica is happy to enthusiastically comply with our Hartford overlords. But I for one am chilled to the core that our government can demand, outside of the legislative process, that I put something, on my body – no less my face, in order to go about my day. And there’s more…soon we will be fined for not complying (oh hello First Amendment).

I think it says a lot about the left today that thinking critically, or even discussing, this government directive as it relates to our unique constitutional rights is viewed as a “petulant child” having a temper tantrum. I would argue the opposite. I for one, think this is something every American should seriously consider every day. What is the left’s limiting principal? I genuinely think they don’t have one. Whether appreciated or not, we are all unbelievably lucky to have our Liberty and it must be fiercely protected. This is not a “minor inconvenience” as Monica would suggest. It is an encroachment on our Liberty.

think it’s also worth discussing whether mask mandates even work. Why are we just blindly accepting this? There are a lot of these examples globally, but California was amongst the earliest states to initiate lock downs and mask mandates. Gavin Newsom introduced the mandate June 19th , 2020 at which point the daily infection rate was 3,893 . California did not experience the peak of daily infections (12,807) until July 21st , with subsequent spikes in excess of 12,000 cases on August 10th and 14th . That’s two months after the mandates began. On the other hand, we have a country like Sweden with arguably much stronger health outcomes, which never went into lock down and has minimal mask compliance. Let’s look further into the data… ya know “science and stuff”: 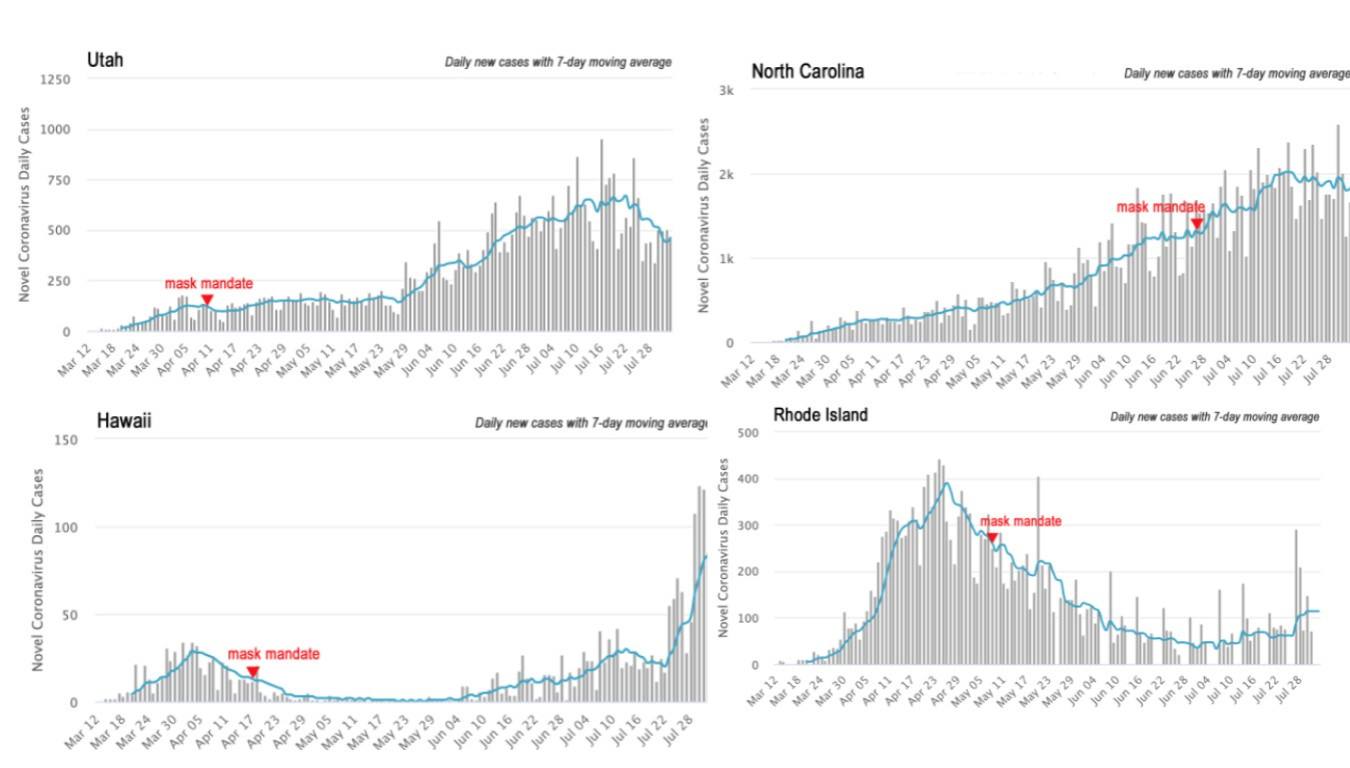 Oh mask mandates work and that is settled science? Yes, in a lab or controlled situation they probably do. But, when you spend all day touching it, putting it in your pocket, dropping it on the floor and then re-using it the next day as many people do, it’s about as useful as washing the dishes with a rag from the trash. As you can see three of the states (UT, NC, HI), like CA, had an increase in cases AFTER the mandate went into place. Rhode island did have a decline, but the trend matched the decline rate prior to masks. The data is just not there to make an unchallenged claim that we all must wear masks for “the greater good”. And if it was actually “settled science” then why our lawmakers not follow these rules personally? Nancy Pelosi, Andrew Cuomo and Ned Lamont, Will Haskell and Chris Murphy have all being caught without masks in public areas at gatherings.

Liberty is something that serves all people in America. It’s not unique to party lines. While today it may seem rational for Monica to tell me to do something out of fear, what happens when the shoe is on the other foot? When the government tells my colleagues across the aisle they must do something they disagree with? Believe me, if the government randomly mandated progressives to purchase a gun “for their safety”…I’d support their right to refuse. The loss of liberty is not sudden. It is a creeping gradualism and I will not stand for it.

Managing a public health crisis isn’t just about one variable. It is a complex nexus of medical, social, economic and political issues. It just really perplexes me as to why this discussion needs to be broken down into to such an emotional and reductive “I’m good, you’re bad” argument.

At the end of the day if you want to wear a mask (for whatever reason), wear a mask. But to ignore the grave implication of mask mandates to our exceptional freedoms as Americans is anything but childish.

I will leave you with this:
Those who would give up essential Liberty, to purchase a little temporary Safety, deserve neither Liberty nor Safety.
– Benjamin Franklin

This piece was written by Carl Higbie on September 16, 2020. It originally appeared in CarlHigbie.com and is used by permission.

Thousands March On Washington For Day of Prayer, President Joins