The chickens are finally coming home to roost. I’ve been writing about the Russia Collusion hoax and politicization of American intelligence agencies since January 2017 and I’m glad to see some progress toward justice for the American people and for the honest patriots serving in our intelligence agencies, who don’t deserve the smear this political fiasco has become.

Kevin Clinesmith, the FBI lawyer identified in Department of Justice Inspector General Michael Horowitz’ scathing report as having tampered with an email from the CIA to him stating Trump campaign advisor Carter Page was a CIA source to “not a source” has pled guilty.

And an official just pled guilty to it

The facts in the court documents show the FBI lawyer altered evidence and provided it to the Crossfire Hurricane team: 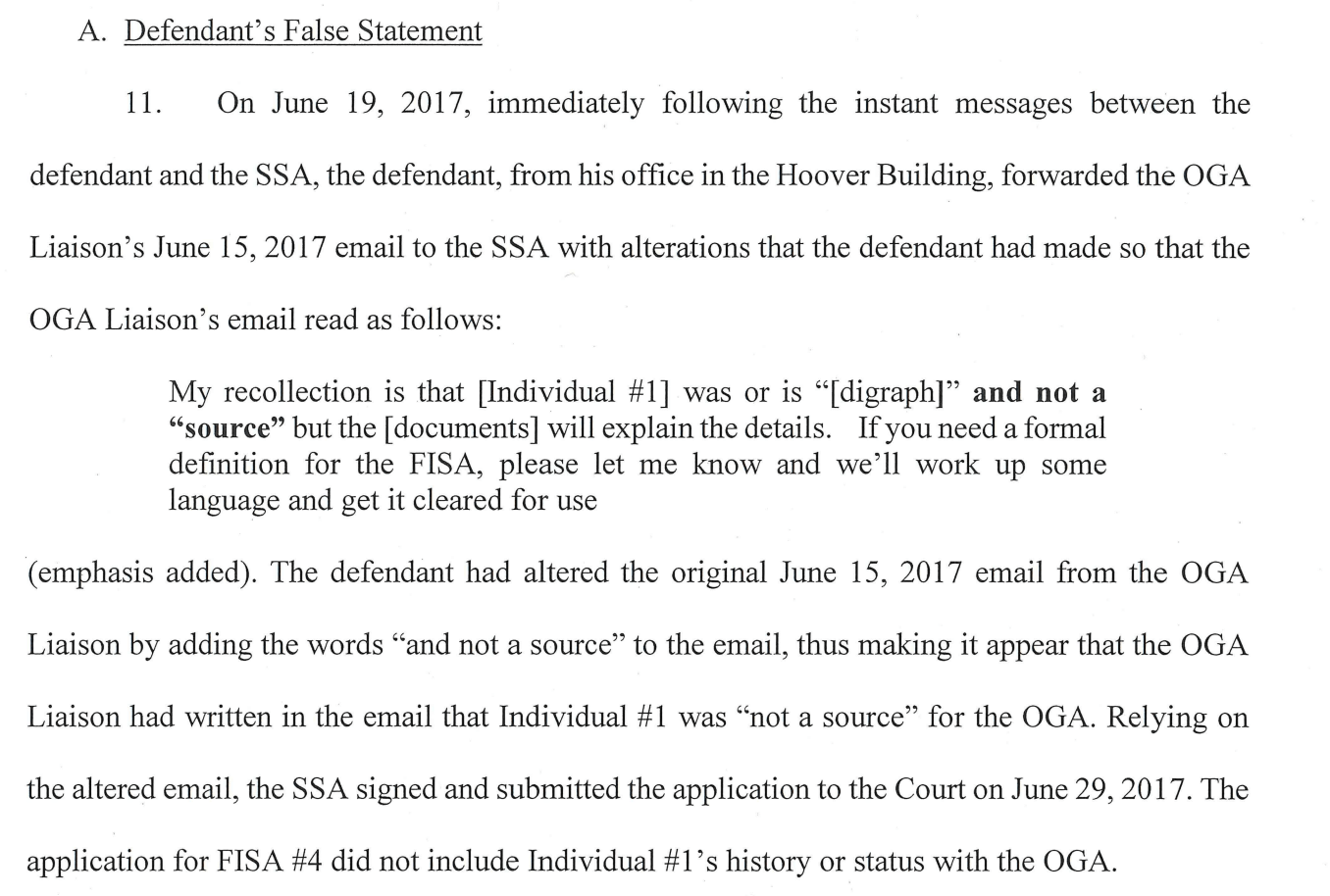 FISA warrants were approved using the debunked Steele Dossier and at least one using this altered evidence. The warrants were the foundation of the Russia collusion hoax investigation that eventually even led to President Trump being investigated by Special Counsel Robert Mueller, who found no evidence anyone in the Trump campaign colluded with Russia in the 2016 presidential campaign.

The single criminal count Clinesmith pled guilty to speaks for itself: 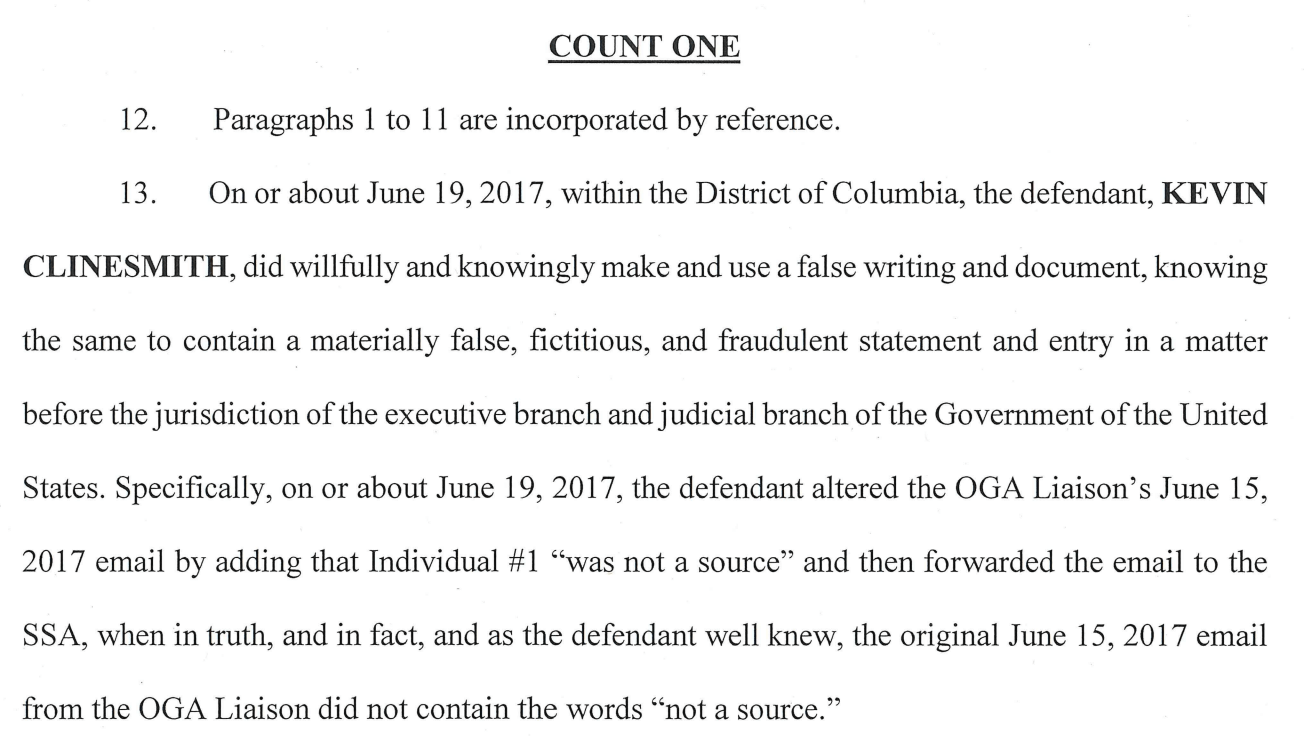 But wait, the New York Times has already tried to minimize Clinesmith’s crime and his role in the investigation of an opposing political presidential candidate and eventually a duly elected President of The United States. Clinesmith wrote the now infamous “viva le resistance” text to another official and was an integrated official throughout CrossFire Hurricane until Mr. Mueller was forced to remove him due to discovery of his extreme bias against Mr. Trump.

A former FBI lawyer plans to plead guilty to falsifying a document in a deal with prosecutors reviewing the Russia inquiry. Prosecutors are not expected to reveal any evidence of a broader conspiracy to undermine President Trump. https://t.co/TPG9zJdVbD

Experts who’ve been following and analyzing the case for years immediately rolled out facts conveniently left out by the New York Times, long thought to be the leading fake news media outlet in the world, especially when it comes to the Russia Collusion hoax now known as Obamagate.

Dear NYT, don’t even bother trying to claim Clinesmith’s “intent” in concealing Page’s CIA status wasn’t deliberate misleading of the FISA court. He *admitted* in an FBI instant message he wanted to avoid having a “terrible footnote” about Page being a CIA source. Case closed https://t.co/pwihFSJSHb

Don’t be fooled by the lies and misleading fake news outlets. Clinesmith is a major player in the entire Crossfire Hurricane effort against President Trump. Check out his approval line on this document approving the faked intelligence briefing to then-candidate Trump and his national security team which included retired US Army Lt General Mike Flynn. 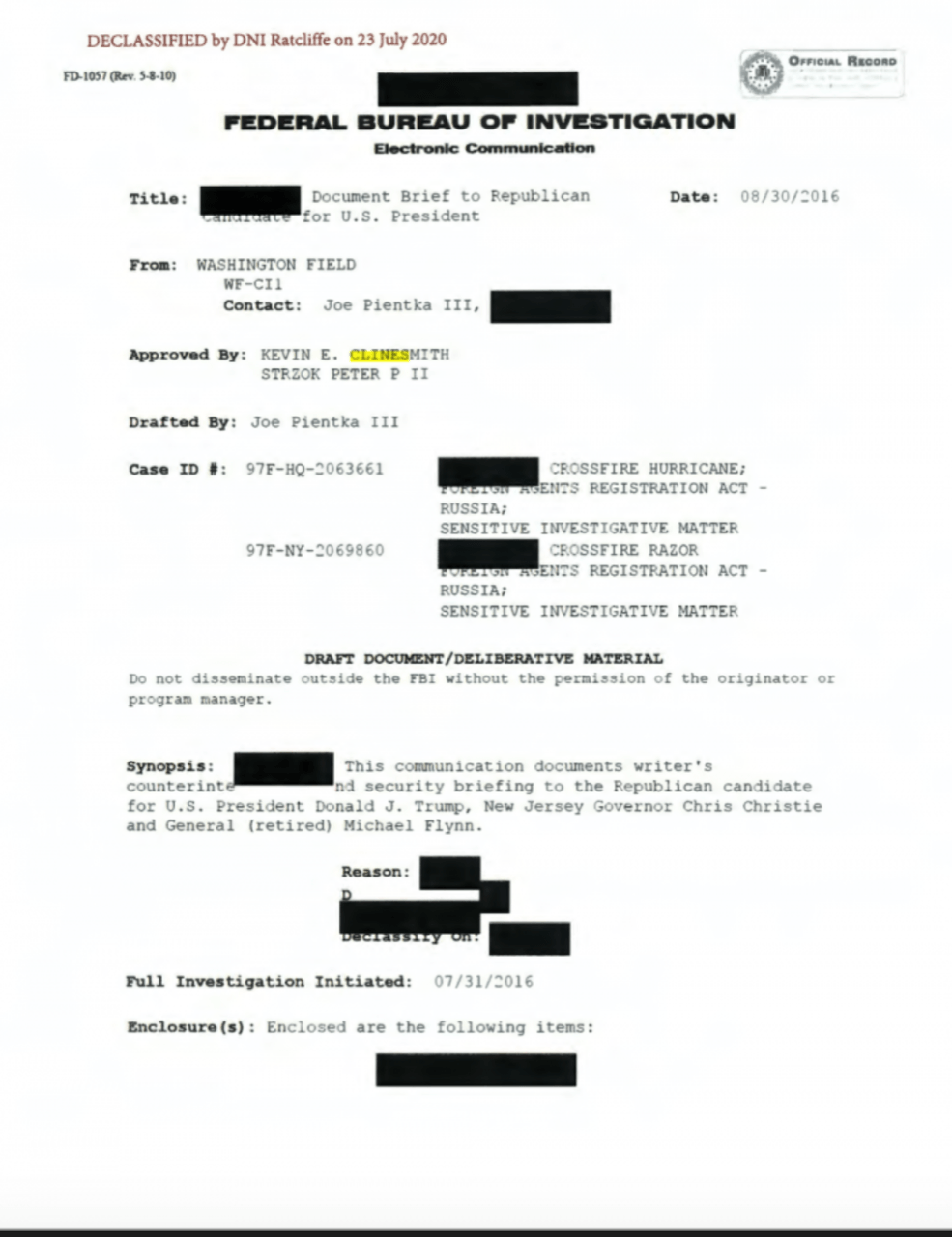 Don’t forget the now infamous January 5 2017 meeting at the White House with President Obama, Vice President Biden, Acting Attorney General Sally Yates, FBI Director Comey, and National Security Advisor Susan Rice. It was in that meeting that Obama directed his team to make sure the right right people were on this and Biden brought up the Logan Act. They were in on it from the beginning, as were former Director of National Intelligence James Clapper and CIA Director John Brennan, and it is time the American people get justice for this obvious attempt to take down a President.

As Part of His Review of FBI Probe, Attorney John Durham Is Now Looking at John Brennan

This piece was written by Col. Rob Maness on August 14, 2020. It originally appeared in RobManess.com and is used by permission.

Read more at RobManess.com:
Letter: Real Blue Dogs, please stand up!
Japan And The Senkaku Islands: Are Our Assumptions Wrong?