This chart is Trump's golden ticket to a 2020 victory!

Sure we all know President Trump will get re-elected in 2020, but this is just further proof, folks!

Fox Business Deirdre Bolton has the golden ticket to Trump’s 2020 victory and it’s all spelled out in this glorious chart: 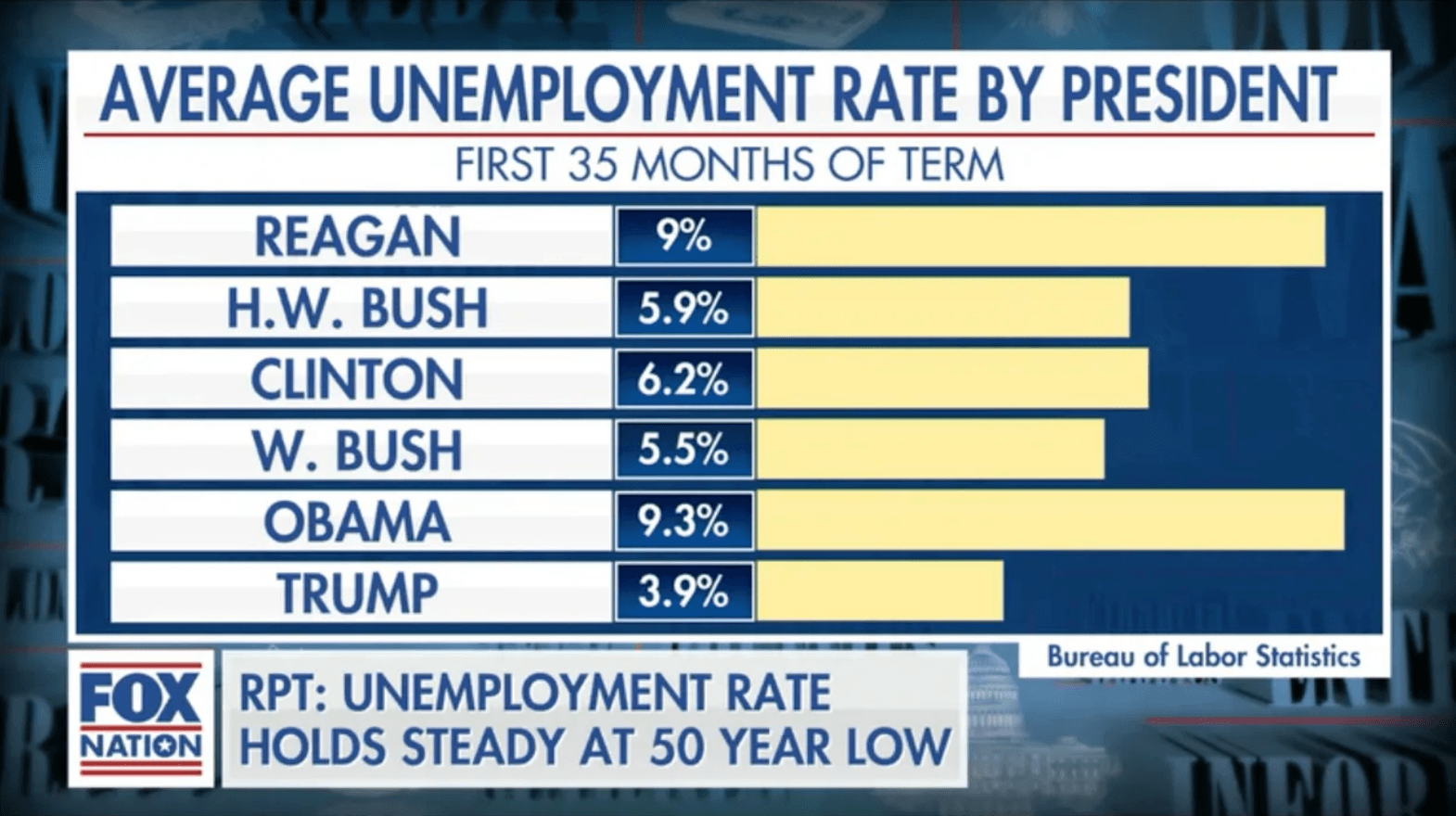 Those numbers definitely don’t lie and any Dem would be running around in circles trying to discredit those figures.

How can the Dems compete with those numbers?

The problem for the Democrat Party is that they have nothing to offer the American public. All they have is “Trump-bashing,” and now all they’re doing is bashing success.

So how will that work out for them?

You simply can’t argue with the results Trump is producing and that’s precisely what Bolton claims will make Trump victorious in 2020.

Three years into Trump’s presidency, and the unemployment rate stands at 3.9 percent, the lowest in 50 years. In second place is President George W. Bush during his first term, showing unemployment at 5.5 percent. Former Pesident Barack Obama fared worst with unemployment at 9.3 percent.

According to the “Deep Dive” panel, the nation’s low unemployment rate, combined with the fact that American workers’ wages are up, bolsters the president’s 2020 prospects and presents a serious problem to Trump’s Democratic challengers.

Investors agree
As TheBlaze reported on Sunday, Goldman Sachs surveyed more than 150 clients and found that almost nine out of 10 of them (87 percent) believe Trump will win re-election in November.

Investors are bullish on Trump’s chances because of the economy. As writer Chris Enloe noted, during Trump’s presidency, the stock market has broken records, unemployment has fallen to near all-time lows, and wages are rising, especially among the lowest paid workers.

Moreover, only 5 percent of investors told Goldman Sachs they anticipate an economic recession this year. [The Blaze]

If this is the path Democrats continue to follow, they’ll be losing a lot more than just the 2020 presidential election.

Read more at WayneDupree.com:
Report: Kathy Griffin Complains That She’s Still Having to “Beg” For Work
Report: Meghan Says Leaving ‘Toxic and Soul-Crushing’ Royals Was a ‘Matter Of Life Or Death’
Royals No More! Harry And Meghan Have Officially Been Removed From Royal Duties And More

3 Robbers Break Into House After Homeowner Posts Gun Collection Online, Now 2 Robbers Are Dead and One is Hospitalized

During Her Continuing Audition for the VP Slot, Michigan Governor Proclaims Healthcare “Heroes” are Racist