Tulsi Gabbard is not quite done going after Hillary Clinton after she accused her of being a "Russian asset."

Tulsi Gabbard is not quite done going after Hillary Clinton after she accused her of being a “Russian asset.”

Now, Tulsi has sicked her attorneys on Hillary, and they’re demanding Clinton retract her statement.

You’ll recall, back in October Clinton said that 2020hopeful Tulsi Gabbard was being “groomed by the Russians” to run as a third-party candidate in order to throw the election to Donald Trump.

“I’m not making any predictions, but I think they’ve got their eye on somebody who is currently in the Democratic primary and are grooming her to be the third-party candidate,” Clinton said.

What a Fool: After NFL Anthem-Kneeler Blames President Trump for Alabama’s Loss He Gets Tackled Online

She then added, “She is a favorite of the Russians. They have a bunch of sites and bots and other ways of supporting her so far. That’s assuming Jill Stein will give it up, which she might not because she is also a Russian asset.”

Tulsi’s lawyers aren’t having it. They’re calling it “defamatory.”

Gabbard’s attorneys told Clinton that statement was defamatory and demanded that she retract it and post the retraction to Twitter as a public notice.

“Your statement is defamatory, and we demand that you retract it immediately,” they wrote in the letter to Clinton.

Gabbard’s attorneys also addressed Clinton’s claim that she was referring to Republicans instead of the Russians, writing, “It appears you may now be claiming that this statement is about Republicans (not Russians) grooming Gabbard. But this makes no sense in light of what you actually said. After you made the statement linking Congresswoman Gabbard to the Russians, you (through your spokesman) doubled down on it with the Russian nesting dolls remark.”

Gabbard qualified for the next round of Democratic primary debates in November and has not shown any interest in a third-party run. [Washington Examiner]

What’s interesting, is that Hillary’s close friend John Podesta lent a lot of help and his political clout to help get Tulsi elected. So, is Hillary suggesting Podesta is also a “Russian asset”?

This is a BIG ONE: [VIDEO] Beck Uncovers Jeffrey Epstein Bombshell Document ‘I Was Told Epstein Belonged to Intelligence and to Leave it Alone’

We reported on this story a few weeks back:

back in 2016, Wikileaks released a series of emails from the account of Hillary campaign chair John Podesta.

Now, as you probably already know, when you think about “bad guys” on the left, Podesta is a name at the very top of nearly everyone’s list.

So, imagine our surprise (not really) when an old Wikileaks-released email resurfaced, showing Podesta was the “mastermind” behind Tulsi Gabbard’s election win in Hawaii.

Senator Kirsten Gillibrand emailed John Podesta to thank him for his help in getting the “progressive” elected. She also references her uber feminist group called “Off the Sidelines” and how Tulsi embodies the spirit of that movement. 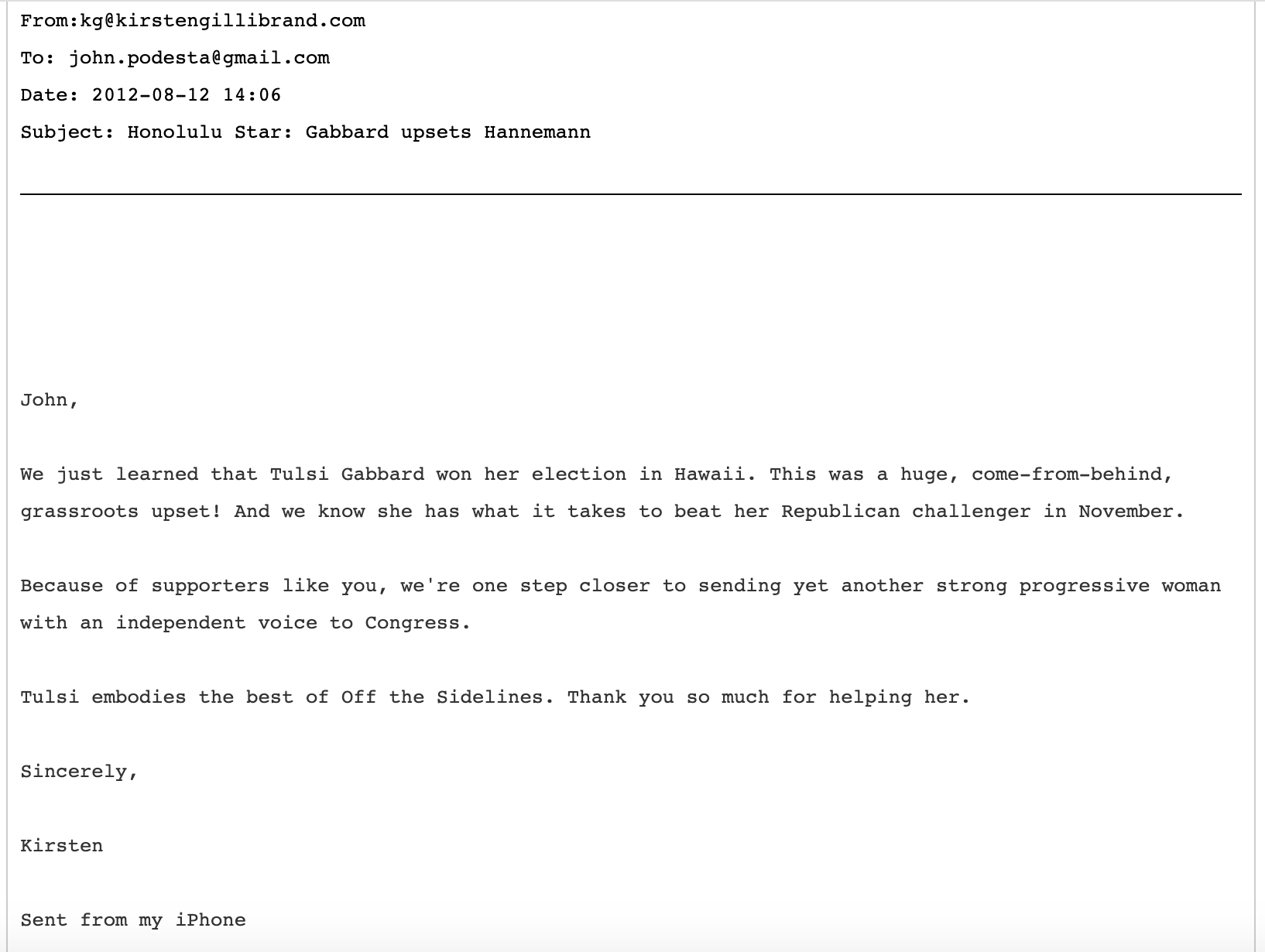 Hillary’s attack on Gabbard was not well-received by most Democrats, like Van Jones, who claimed back in October, that Hillary was playing a “dangerous game.”

You can watch that video below:

This piece originally appeared in WayneDupree.com and is used by permission.

Report: Security Guard Charged With Murder After Shooting a Man Who Entered Store Without a Mask

Iran: Damage To Natanz Setting Back Nuclear Program By Months