A Michigan facility for the elderly has made it clear to some senior citizens coming there, that they are not allowed to pray before eating meals that are supplied with funding that comes in part from the federal government. Those who attend the daily meals at the Ithaca Senior Center in Gratiot County, Michigan were told by at least one official at the center that they would likely lose their federal funding if they continued to say Grace before eating. The warning was part of an official memo shared with seniors in attendance at the daily meals earlier this week.

Some of those seniors, including some with disabilities due to their age, say they were shocked by the blunt and thinly veiled threat. One elderly participant said they were told, “if you continue to pray you know what will happen.” Those on hand for lunch took that to mean the food would be cut off and taken away if they continued to say Grace before their meals. Some of the seniors that attend the meals say they were told that because the food is paid for with federal money and saying a prayer before they eat ‘violates the separation of Church and state.’

As many as forty people a day eat at the Ithaca Senior Center and rely on the food to eat. “Without these meals these people have no other options,” said one person familiar with the story. In fact, these people would have no other alternatives and would likely just go hungry without the program. One person close to the investigation said, “The fact is the government is making these old folks choose between their faith and their food.” “It makes me sick to my stomach,” remarked a woman discussing the issue. This is ‘simply outrageous’ was the words used by a number of people that were asked about the ongoing threats, possible intimidation, and the idea of using food as a weapon to make people do as the government demanded.

A Michigan legal group, The Great Lakes Justice Center, is reviewing the facts of the matter and is working to gather more information. David Kallman, Sr. Counsel with the GLJC remarked on the Steve Gruber Show that this is a flagrant use of the Establishment Clause. “I have left numerous messages with those at the senior center as well as those at state and federal agencies that are involved with supplying food to the elderly throughout Michigan,” Kallman said. However, the legal aid organization said it looks like a clear violation of the civil rights of the senior citizens that are participating in the meals. Kallman added “It appears they are conducting prayers before eating on a voluntary basis. This is not something that is being mandated by the senior center, this is something the people are doing because they want to.” “This does not violate federal law or the establishment clause by any stretch of the imagination,” Kallman continued, “and we will try to get them to back off this demand but if they don’t we will step in and pursue legal action against the center.

How on earth can Americans be told they can either eat or they can pray, but they cannot do both in 2017? It seems the government is demanding they conduct themselves as atheists or be denied their basic needs as prescribed by law. Atheism is a theology absent God. How is that any different than the state dictating what religion you must follow? Why is it okay to violate their basic human rights if they want to say Grace? The simple answer is it is not. The policy has now been formally challenged by the Great Lakes Justice Center in a letter dated August 18, 2017. Here is the statement from the GLJC: 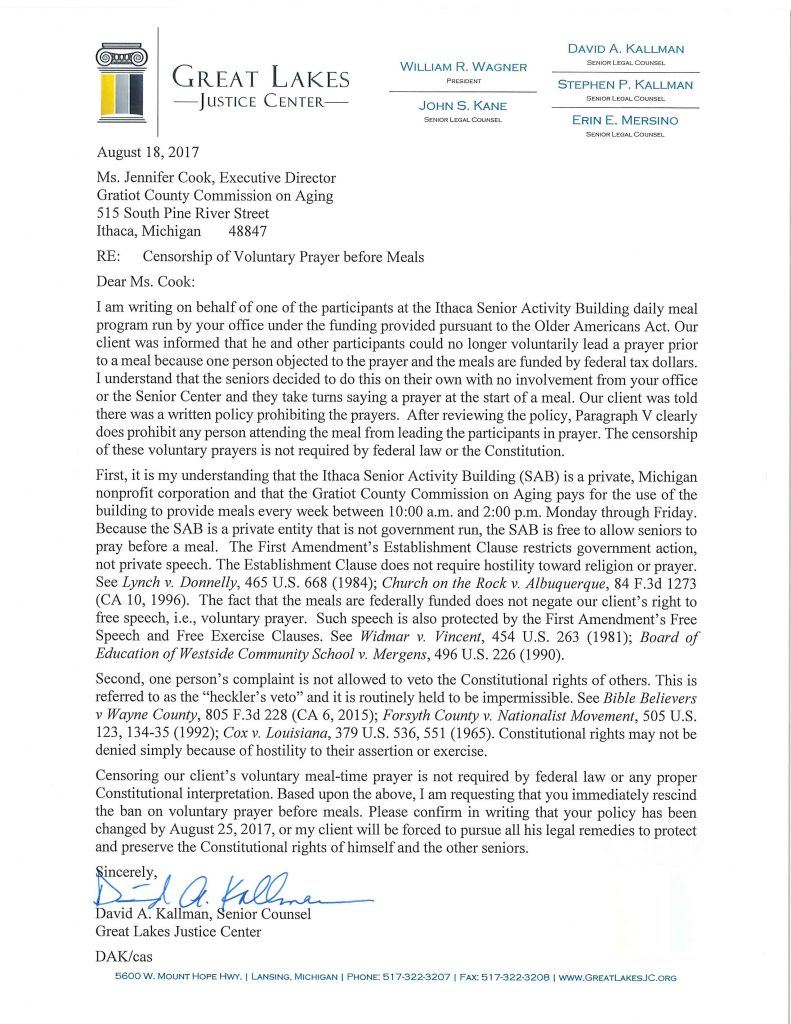 So far, there has been no response from officials from Gratiot County, The Commission on Aging or the Ithaca Senior Center.